On this day in 1933, Franklin Delano Roosevelt gave the first of his famous fireside chats.

(to listen to this piece in podcast form click here)

It had never been done before. Or, it had, but not like this. On March 12, 1933, sixty million Americans listened to Roosevelt’s first radio address. Thus began a tradition that continued throughout Roosevelt’s presidency. The “fireside chats,” as journalist Robert Trout coined them, became a cornerstone of American life, as the country struggled with the Great Depression and toppled towards war.

Roosevelt wasn’t the first president to use radio to communicate with the country. Calvin Coolidge had given the first ever White House radio address, when he eulogized Warren G. Harding. Herbert Hoover had also used radio, both as a campaign tool and to give radio addresses, but he came across as much more formal than Roosevelt.

For example, during a radio address that Hoover gave on the anniversary of Abraham Lincoln’s birthday, February 12, 1931, a little over a year since the markets had crashed, Hoover started like this:

“The Federal Government has assumed many new responsibilities since Lincoln’s time, and will probably assume more in the future when the States and local communities cannot alone cure abuse or bear the entire cost of national programs, but there is an essential principle that should be maintained in these matter.”

By contrast, Roosevelt’s first fireside chat started like this:

“My friends, I want to talk for a few minutes with the people of the United States about banking—to talk with the comparatively few who understand the mechanics of banking, but more particularly with the overwhelming majority of you who use banks for the making of deposits and the drawing of checks.”

After Roosevelt’s address, letters poured into the White House in support of the president.

Virginia Miller wrote: “I want to thank you from the bottom of my heart for your splendid explanation of the Bank situation on last evening’s broadcast.”

Viola Hazelberger wrote: “I have regained faith in the banks due to your earnest beliefs.”

And James A. Green said: “You have a marvelous radio voice, distinct and clear. It almost seemed the other night, sitting in my easy chair in the library, that you were across the room from me.”

Suddenly the president seemed accessible. Whereas Herbert Hoover had averaged about 5,000 letters a week, the number of people writing to Roosevelt leapt to 50,000.

It’s no wonder, then, that Trout announced to Americans: “the president wants to come into your home and sit at your fireside for a little fireside chat.” The title stuck. It did feel, to many people, as if the president was sitting in their parlor.

Certainly it was one thing to have a radio and a large audience, but quite another to speak with the eloquence and clarity that FDR used while speaking to the country (just ask Herbert Hoover). Roosevelt succeeded in reaching a great number of Americans, and giving a boost to their confidence.

Other presidents have similarly used new technologies to communicate with a mass audience. An obvious example is President Trump’s use of Twitter. President Obama used Facebook, and even appeared on “Between Two Ferns” to promote his health care legislation. President Kennedy, too, used the new power of television to reach more Americans. Kennedy gave the first live televised press conference.

Eight-six years ago in 1933, Roosevelt ended his address like this:

“After all, there is an element in the readjustment of our financial system more important than currency, more important than gold, and that is the confidence of the people. Confidence and courage are the essentials of success in carrying out our plan. You people must have faith; you must not be stampeded by rumors or guesses. Let us unite in banishing fear. We have provided the machinery to restore our financial system; it is up to you to support and make it work.

It is your problem no less than it is mine. Together we cannot fail.” 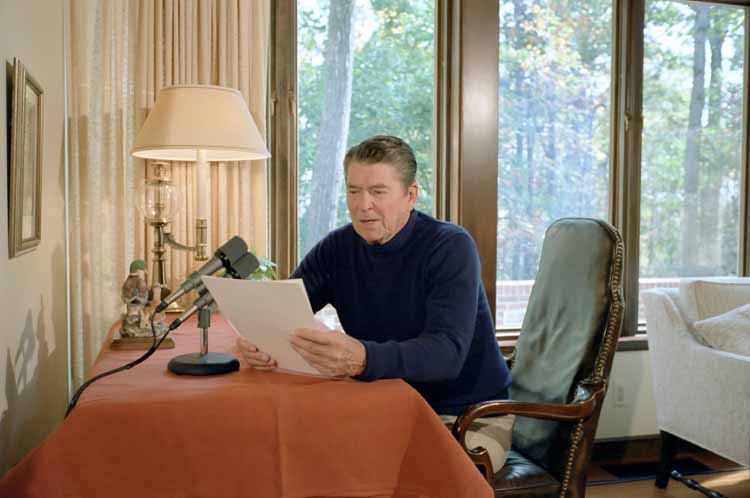 When Donald Trump tweeted about North Korea’s Kim Jong-un last year, mocking him as “Little Rocket Man” and a “madman”, some worried that Trump’s cavalier attitude could lead to a nuclear war. The president often speaks off the cuff, without prepared remarks vetted by advisors. During a meeting on the opioid crisis, Trump improvised the now infamous line “fire and fury” to describe the American response to any North Korean provocation.

Trump isn’t the only president to spark fears of war through idle talk (or tweets). Ronald Reagan did the same in 1984. Now, Trump finds himself similarly faced with the possibility of peace after much stone-throwing on both sides.

In the age before Twitter, Reagan gave weekly radio addresses every Saturday starting in 1982. He would give 331 such addresses during his time in the White House. (In his first year as president, Trump tweeted 2,461 times). During a sound check for one of Reagan’s radio addresses, the president joked:

“My fellow Americans, I’m pleased to tell you today that I’ve signed legislation that will outlaw Russia forever. We begin bombing in five minutes.”

News of the remark quickly leaked, to the outrage of American allies and adversaries abroad. The central Soviet news agency, TASS (Telegraph Agency of the Soviet Union) released a statement condemning “this unprecedented and hostile attack by the U.S. president…this kind of behavior is incompatible with the great responsibility borne by heads of nuclear states for the destinies of their own people and mankind.”

North Korean Leader Kim Jong Un just stated that the “Nuclear Button is on his desk at all times.” Will someone from his depleted and food starved regime please inform him that I too have a Nuclear Button, but it is a much bigger & more powerful one than his, and my Button works!

North Korea responded by calling the president a frightened “lunatic.” Many in the American political class condemned the president’s tweet as overtly provocative and undiplomatic.

Reagan would go on to develop a close relationship with the Soviet General Secretary Mikhail Gorbachev, and the two of them would work together to reduce the number of nuclear weapons–boosting Reagan, but dooming Gorbachev. Trump likewise is flirting with peace in North Korea. His recently appointed Secretary of State, Mike Pompeo, met with Kim Jong-un over Easter, and high-level talks seem imminent.

Trading barbs is the easy part–now the Trump administration, like Reagan’s, must see if they can find diplomatic footing with the North Koreans in search of stability on the Korean peninsula.