This week marked a historic chapter in relations between the United States and North Korea. We take a look back on how the initial conflict began and ended, under the Truman and Eisenhower administrations:

The United States first joined the Korean War in 1950, when Harry Truman ordered American troops to help the Democratic South repel an invasion from the Communistic North. Truman did not rule out using the atomic bomb, stating that the 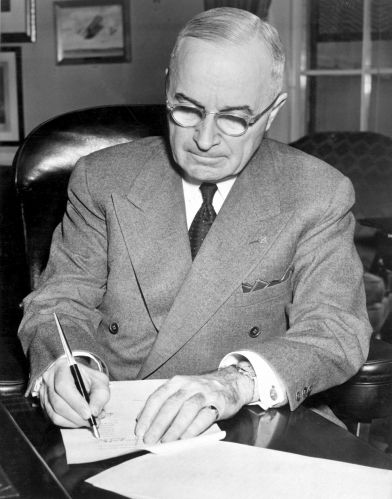 United States would “take whatever steps were necessary” to stop the communists. He added that he never wanted to use the bomb again, acknowledging, “it is a terrible weapon, and it should not be used on innocent men, women and children.”

Public approval of the war quickly dovetailed, and one of Truman’s generals, Omar Bradley, testified in Congress in 1951 that any expansion of the war to include China would put the United States “in the wrong war, at the wrong place, at the wrong time and with the wrong enemy.”

Truman received a letter from a bereaved father who’d lost his son, including the son’s purple heart, which read:

As you have been directly responsible for the loss of our son’s life in Korea, you might just as well keep this emblem on display in your trophy room, as a memory of one of your historic deeds.

Our major regret at this time is that your daughter was not there to receive the same treatment as our son received in Korea.

Truman reportedly kept this letter in his desk.

In 1952, Korea was a vital part of Eisenhower’s campaign. He argued that as a military man, he would be better equipped to handle the conflict than Adlai Stevenson, the Democratic candidate. When Harry Truman challenged Eisenhower to come up with a better policy than what the Truman administration was pursing, Eisenhower responded in a speech detailing his foreign policy goals. He said that, if elected, he would personally visit Korea in order to understand how to win the war. He also promised the American people that there would be no appeasement from his administration–indicating that lessons from WWII still lay heavily on American policymakers.

In response, Truman said that if Eisenhower knew how to end the war, he should tell the country. “Let’s save a lot of lives and not wait…if he can do it after he is elected, we can do it now.”

The month after he was elected president, Eisenhower made good on his word and flew to Korea. (Truman offered the use of his plane, Independence, adding “if you still desire to go to Korea.” Eisenhower refused the offer). Seven months after he was inaugurated, despite pressure from within his cabinet and within his party (and even from the South Koreans) Eisenhower pushed through the signing of the armistice, which would bring the conflict to a close.

In an announcement to the American people Eisenhower said: “And so at long last the carnage of war is to cease…” he finished his short address by quoting Lincoln. “With malice toward none; with charity for all; with firmness in the right as God gives us to see the right, let us strive on…to do all which may achieve and cherish a lasting peace, among ourselves, and with all nations.”

In the next eight years, not a single American serviceman would die. But then came Vietnam. Despite provocations from North Korea, it largely took a backseat to the Vietnam conflict. In this light the Korean War became, as it is oft-referred to, the “forgotten war.” American presidents after Truman and Eisenhower focused less on Korea than they did on other conflicts in the region and around the world.

It’s not yet clear what may change now that President Trump has met with Kim Jong-un. As of this writing, there is still no peace treaty which means that, despite Eisenhower’s armistice, the Korean War never ended.

One thought on “Truman, Eisenhower, and the Roots of the Korean War”