As another set of Olympic Games comes to a close, the world is left with the usual rivalries, upsets, records, and inspiring stories that go down in history. In particular, much press before and during the 2018 Winter Olympics has focused on the Russian doping scandal and Vladimir Putin’s claims that the United States is behind the bans on Russian athletes, renewing tensions between Russia and the United States.

Many presidents and world leaders have used the athletic competition as a platform to discuss politics. Citizens rally around their athletes, resulting in a heightened sense of pride and patriotism, and the Olympics offer an international forum to discuss global relations. 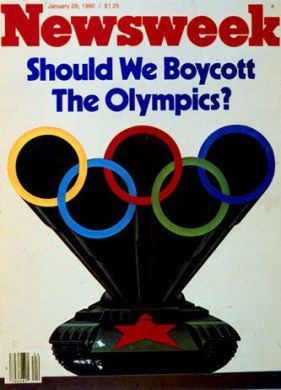 One of the most well-known examples is President Jimmy Carter’s boycott of the 1980 Summer Games in Moscow to protest the Soviet Union’s politics. After a relatively quiet period of the Cold War, the Soviet Union invaded Afghanistan in late 1979, and several countries condemned the action. Threats by Carter included trade embargoes and a boycott of the Summer Games if the Soviets did not remove their forces from Afghanistan. Carter was not generally considered to be skilled at international politics, and his action was seen by many as a weak attempt at asserting himself. It is worth noting that his term was ending in 1980, and he would soon be running for reelection.

In a statement on January 4th, 1980, Carter said, “Although the United States would prefer not to withdraw from the Olympic games scheduled in Moscow this summer, the Soviet Union must realize that its continued aggressive actions will endanger both the participation of athletes and the travel to Moscow by spectators who would normally wish to attend the Olympic games.” He set a deadline of one month for troops to pull out of Afghanistan, which critics interpreted as a strangely specific ultimatum.

Ronald Reagan, running for the Republican nomination, was mixed in his response to Carter’s boycott. Reagan first said that the athletes should be allowed to decide whether or not they wanted to go, that it wasn’t the government’s place to direct them one way or the other. He later agreed with Carter that the United States “should boycott the Olympic games,” drawing criticism from right wing media and his Republican rivals, notably his future Vice President George H.W. Bush, of being “wishy-washy” on the issue. Reagan later stated that “if [Carter] cannot persuade the athletes to stay away from Moscow he has only himself to blame.” Reagan, playing politics, knew how to strike Carter where it hurt—his weakness at home and abroad.

Senator Ted Kennedy, who was running against Carter in the 1980 Democratic Primary, criticized Carter for the decision as well. Kennedy said, “I will support a boycott of the Olympics, but I want to make clear that the embargo and the boycott are basically symbols and they are not an effective substitute for foreign policy.” Carter’s competition on both sides of the aisle made the Olympic boycott a topic of debate. Both Republicans and Democrats used it as an indication of weakness in his presidency.

The tension eventually led to the largest boycott of the modern Olympic Games when the Soviets did not remove military forces from Afghanistan; sixty-five additional countries did not attend for political or economic reasons. Many U.S. allies joined the boycott, and for others, it was an indication of support for anti-Soviet sentiments.

Notably, the Winter Olympics were also held in 1980- in Lake Placid, New York. The Winter Games began in mid-February, shortly after Carter’s January speech. Athletes from the USSR participated in the Lake Placid Olympics, earning a total of 22 medals, ten of which were gold, compared to a total of twelve from the United States. The rivalry between the two countries was amplified during these Games, and the USSR came out on top in the medal count.

However, one of the most famous moments from the games was the “Miracle on Ice”

hockey match between the United States and the defending Olympic champions, the Soviet Union. The team from the United States, primarily consisting of amateur players, scored two goals in the final period to upset the Soviet team 4-3. President Carter called the locker room following the game to congratulate the team; reportedly, they even briefly discussed the differing beliefs between the U.S. and U.S.S.R. The Miracle on Ice game is not only a highlight from the Lake Placid Games, but also one of the most iconic sports moments in history. It was especially significant considering the renewal of Cold War tensions and Carter’s boycott proposition, representing the conflict between the two nations and the ultimate victory of the United States.

Carter followed through with the boycott, and he additionally threatened to suspend the passports of any U.S. athletes who chose to attend the Moscow games. In turn, the U.S.S.R. initiated a boycott of the 1984 summer Olympics held in Los Angeles, as did more than a dozen additional countries.

Carter’s stance received mixed reviews. Many saw it as a commitment to overcoming the Soviet Union and the threat they posed to democracy. Much of the media and many prospective Olympians were unhappy that athletes lost the opportunity to compete. Several expressed that the best way to defeat the Soviets was to go to the Olympics and beat them in competition, similar to the victories of athletes like Jesse Owens winning four gold medals in the 1936 Nazi Olympics in Berlin.

The ancient Olympic Games in Greece saw city-states suspend fighting and come together once every four years for the Olympics. The modern Olympic Games, although intended to bring countries together through a multi-national athletic competition, have had seven boycotts and even more instances of controversy. The Olympic Truce was reestablished in the early 90s, which encourages countries to allow safe travel for athletes and spectators and promotes global cooperation. The Truce hasn’t ceased wars or eliminated international tension, but it ended the period of boycotts in four successive Summer Olympics. As the 2018 Winter Games in Pyeongchang demonstrate, external tensions among countries persist during the Olympics, and the U.S. and Russia are still no exception.