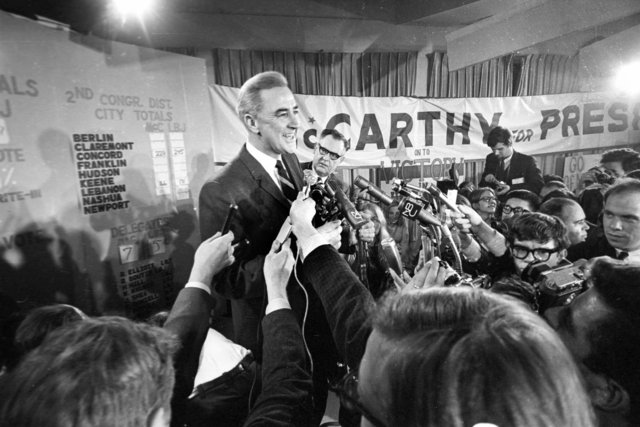 (To check out this piece in podcast form, click here)

There’s really no saying what will happen. So far the race is remarkably diverse, with multiple women candidates and people of color. With the announcement of Pete Buttegieg’s candidacy this morning, 2020 will also have an openly gay candidate.

If there’s one thing predictable about campaigns, it is that they are unpredictable. Big names at the beginning sometimes don’t get far. Political giants cancel each other out, or burn out early on. A brief moment, a single misstep, can crater a candidacy (see Howard Dean or Ed Muskie).

With a diverse field on the left (and the possibility that the president will face a challenger from within his own party) there’s no telling who may come out on top. And indeed, dark horse candidates are a fixture of American political history.

James Garfield was one of the first dark horse nominees in American history, although he came to that position more as a consensus candidate than a total surprise. Garfield attended the convention in 1880 not as a candidate, but to nominate John Sherman of Ohio. When the convention deadlocked, Garfield’s name was surprisingly added to the mix, and on the 36th ballot he came out on top as the nominee. The day before his inauguration he noted: “This honor comes to me unsought. I have never had the presidential fever; not even for a day.”

Certainly as the power of party bosses dimmed, and as the primary process became more democratic, the possibility of a dark horse candidate grew. The nation saw a stark example of this in 1968, when Eugene McCarthy became the front runner by running against the president of his own party.

The election of 1968 was a race filled with political giants. Lyndon Johnson was set to run for reelection. There were rumors of a challenge from the left by Bobby Kennedy. On the right, Richard Nixon had begun his carefully executed comeback tour, and he faced opposition from George Wallace, the firebrand governor of Alabama who infamously declared: “segregation now, segregation tomorrow, segregation forever!”

Eugene McCarthy was a senator from Minnesota. He had voted for the Gulf of Tonkin resolution but had become increasingly critical of the Vietnam war. As Kennedy wavered over challenging a sitting president, McCarthy announced his intention to hit Johnson from the left. When McCarthy won 42% of the vote in the New Hampshire primary, he exposed deep rifts among the electorate surrounding Vietnam.

From here, the race descended into one of the most dramatic in American history–Johnson dropped out, Kennedy jumped in, and the year saw violent riots, assassinations, and the election of Nixon. When Hubert Humphrey, then LBJ’s vice president, joined the race late and finally won the nomination, it struck many as decidedly undemocratic.

Other dark horse candidates dot American history. No one took John Kennedy seriously when he announced his intention to run–Harry Truman pressed Kennedy to “be patient” and Lyndon Johnson called his future running mate “little scrawny fellow with rickets”. Bill Clinton rose to the top of an uncrowded field because most serious Democrats accepted the logic of the day that George H.W. Bush was unbeatable–SNL even parodied the skittishness of Democrats who hesitated to challenge the president.

Of course, the most recent example of a dark horse candidate ascending to the presidency is that of 2016, and the election of Donald J. Trump.

With a crowded field, and the possibility of a challenge to a sitting president, there’s no telling what may happen next. History may offer some examples, but 2020 is shaping up to be a beast of its own.

One thought on “Predictability of the Unpredictable: Dark Horse Candidates & 2020”