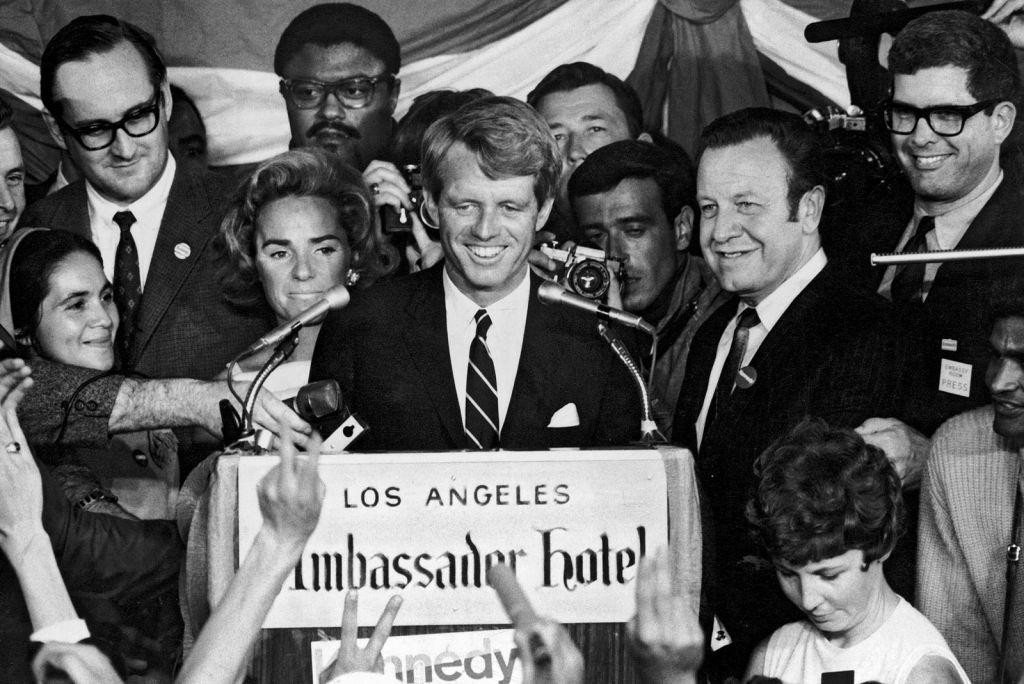 “What I think is quite clear is that we can work together in the last analysis and that what has been going on in the United States over the last three years, the divisions, the violence, the disenchantment with our society, the divisions whether it’s between blacks and whites, between the poor and the more affluent, or between age groups or on the war in Vietnam, that we can start to work together.

“We are a great country, an unselfish country, a compassionate country. And I intend to make that my basis for running. So, my thanks to all of you, and now it’s on to Chicago and let’s win there.”

These were the last words Robert F. Kennedy spoke to a crowd of jubilant supporters after he won the California primary during his run for president in 1968. He and his team disappeared into the kitchens of the Ambassador Hotel in Los Angeles–minutes later, Kennedy was shot.

President Johnson, no fan of Bobby Kennedy, spoke to the nation following Kennedy’s death. Johnson said that Kennedy, “affirmed this country–affirmed the essential decency of its people, their longing for peace, their desire to improve conditions of life for all…Our public life is diminished by his loss.”

Today history is rife with what-if questions surrounding Bobby Kennedy. What if he had lived, and became president instead of Richard Nixon in 1968? Friends and family of Kennedy have recently thrown the resolution of his assassination into doubt. Although perhaps not as widely disputed as his brother Jack’s death, Bobby Kennedy’s son and his close friend and campaign aide, Paul Schrade, have both pointed to flaws in the case.

Kennedy’s assassination marked another bloody event in a year that had already seen student protests, climbing casualties in Vietnam, and the assassination of Martin Luther King, Jr. Speaking to the American people, Johnson noted: “in a climate of extremism, of disrespect for law, of contempt for the lives of others, violence may bring down the very best among us. A nation that tolerates violence in any form cannot expect to contain it to minor outbursts.”