On this day in 1959, Dwight D. Eisenhower issued Proclamation 3309, creating the state of Hawaii. The admission of Hawaii brought the total of U.S. states up to fifty, and it is the most recent addition to the Union.

Upon signing his proclamation, the president said:

All forty-nine States will join in welcoming the new one–Hawaii–to this Union. We will wish for her prosperity, security, happiness, and a growing closer relationship with all of the other States. We know that she is ready to do her part to make this Union a stronger Nation–a stronger people than it was before because of her presence as a full sister to the other forty-nine States. So all of us say to her, “Good Luck.” And to each of her representatives, a very fine tour of service in the public domain. We know that they will find their work interesting and fruitful for all of us.

Ike had long been a proponent of admitting both Hawaii and Alaska to the Union, and his presidency saw the absorption of both territories.

The road to statehood was a bumpy one–Hawaii’s royal family first proposed joining the Union in 1919. Congress voted down the idea multiple times before 1959, although Eisenhower made it a proponent of his 1952 campaign. Democrats feared that Hawaii would become a Republican stronghold, and pushed for the inclusion of Alaska to balance things out. Some Americans found its distance from the continental U.S. problematic; others opposed Hawaii’s inclusion on racial grounds.

Some native Hawaiians did not want to join the Union, either, and today there is a Hawaiian sovereignty movement. 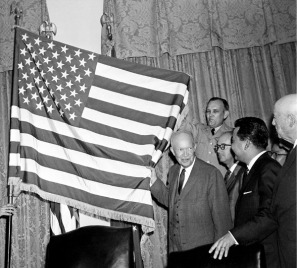 Still, for most Americans today there has never been a United States without Hawaii. The flag that changed under Eisenhower to include 50 stars is the one that most Americans grew up seeing flying over buildings, hanging off porches, or being held on the 4th of July.

Barack Obama, the only American president born in Hawaii, attributes his famous calm demeanor to his childhood in the 50th state. “I always tell folks part of it’s being born in Hawaii,” Obama said, “and knowing what it’s like to jump into the ocean and understanding what it means when you see a sea turtle in the face of a wave.”

One thought on “Eisenhower & the 50th State”