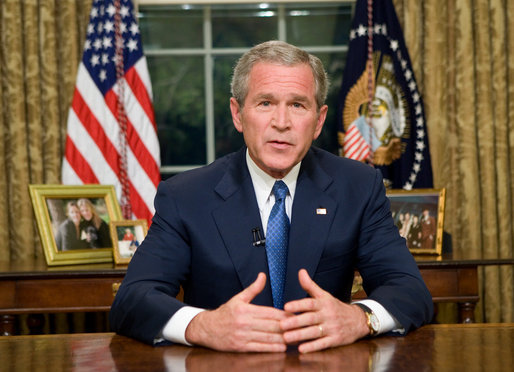 Last week, President Bush gave a speech defending traditional American values, which many interpreted as a veiled attack on President Trump. The twittersphere was full of comments and memes about how Bush was no longer the worst president, how he had “joined the resistance”, and that, compared to the daily twists and turns of the Trump administration, Bush’s was almost idyllic.

It’s a strange thing, since Bush left office in 2009 with an approval rating in the mid 30s.

Still, Bush is not alone. Aside from Richard Nixon, whose legacy continues to suffer, most presidents who leave office as unpopular figures see their approval rating climb as the nation moves on. In 2017, Bush now has an approval rating of 59%. Harry Truman also left office with an approval rating in the mid-30s. Yet today he often finds himself in the top ten of lists of the best presidents. Lyndon Johnson, likewise, decided that he would not run for reelection in 1968 because of his deep unpopularity and his failure to end the war in Vietnam. Yet today he is lauded for his work on the Great Society and civil rights, and also often ranks high among the “best” presidents.

In this era of immediate news it seems society is expected to form opinions as fast as possible. Still, it’s worth noting that legacy is something alive, something that can change with time and perspective. It’s difficult to see how actions today can alter the events of tomorrow. Trump is currently one of the most unpopular presidents of all time, especially so early in his term. He does not seem to have the capacity or desire to change the course he’s on–yet it’s impossible to say whether this unpopularity will endure or whether Trump’s legacy, whatever that is, will be given the same, gentle treatment of his modern predecessors.

Then again, he might join universally acknowledge duds–duds like James Buchanan and Warren Harding, who through their ineffectiveness and corruption consistently find themselves at the bottom of presidential rankings.