The American political system has changed significantly in the nearly one hundred years since the passing of the 19th amendment in 1920 that granted women the right to vote. Not only were women provided a new right to contribute to the government, but slowly, women began to occupy federal positions as well.

Four years before the 19th amendment was ratified, Jeanette Rankin became the first woman elected to the House of Representatives. Six years later, Rebecca Felton filled an interim seat for only one day as a United States Senator (an activist and suffragette, Felton’s seat was largely symbolic). It was not until ten years later in 1932 that a woman was truly elected to serve in the Senate when Hattie Caraway secured a seat from Arkansas.

Simply having women in Congress is not necessarily a symbol of progress in the women’s rights movement. Just under 1/5 of the seats in the House of Representatives are currently occupied by women. This is the highest percentage in the history of the House. Only since 1978 has a woman consistently filled a seat in the Senate, and it wasn’t until 1992, over seventy years after the passage of the 19th amendment, that three out of one hundred Senate seats were held by women at one time. With the appointment of Tina Smith to fill Al Franken’s Senate seat, there will be more women in the Senate than ever–twenty-two.

Sandra Day O’Connor famously became the first female Supreme Court Justice when she was appointed by Ronald Reagan in 1981. O’Connor’s appointment was viewed as a major victory for the women’s rights movement, demonstrating that a woman could serve on the highest court in the country. With women employed in Congress, as governors, and at the local level, the Supreme Court was the latest governmental barrier to break. Today, three of the nine justices are women.

With the legislative and judicial branches populated with women, only the metaphorical glass ceiling of the executive branch has yet to be shattered. Hillary Clinton was the first woman to make a run for the presidency as a candidate from a major political party; however, women have been denied even lateral access to the White House prior to 2016.

In the presidential election of 1984, Geraldine Ferraro joined the ticket of Walter 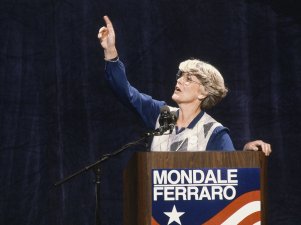 Mondale, who won the Democratic nomination. Formerly a member of the House of Representatives, Ferraro was the first female vice presidential candidate for a major party. Not surprisingly, the media focused on the novelty of a female on a major ticket and critiqued her on inexperience. Reporters called into question her marriage, family finances, and even tried to invent a connection to the Italian mob based on her family’s heritage. The campaign never recovered, and Reagan/Bush went on to win decisively in November.

Sarah Palin received scrutiny as well when she became John McCain’s running mate in the 2008 presidential election.  Beyond inexperience, the media had a seemingly endless supply of drama-filled topics and attacks; her intelligence, her teenage daughter’s pregnancy, and her history in beauty pageants. Likely voters had divided opinions about her, especially after a story that the Republican National Committee had financed her wardrobe. Although she later became an icon of the conservative movement, McCain/Palin lost to Obama/Biden 52.9% to 45.7%.

Transcending party lines and spanning decades, attempts to elect a woman into the White House, either as the president or vice president of the United States, have fallen short. The closest we have come is seeing intelligent, accomplished first ladies take on projects during their husbands’ time in office, at least gaining some platform to enact change. This tradition started largely with Lady Bird Johnson’s national beautification initiative and has continued ever since. Before Lady Bird made the tradition official, Eleanor Roosevelt was an outlier in her determination to use her platform to make a difference. When she spearheaded an anti-lynching campaign during her husband’s presidency, a New Jersey woman wrote FDR’s assistant, asking if the president couldn’t “muzzle [his wife]…she talks too damn much.”

Political scientists and sociologists can speculate about whether voters are threatened by powerful women, more comfortable with “traditional” gender roles, or perceive women as having weaknesses ill-suited for executive power. Yet given Clinton’s near miss in 2016, it seems likely that there will be another great shift in American political culture, as in the 1920s, which will finally see a woman win the White House.