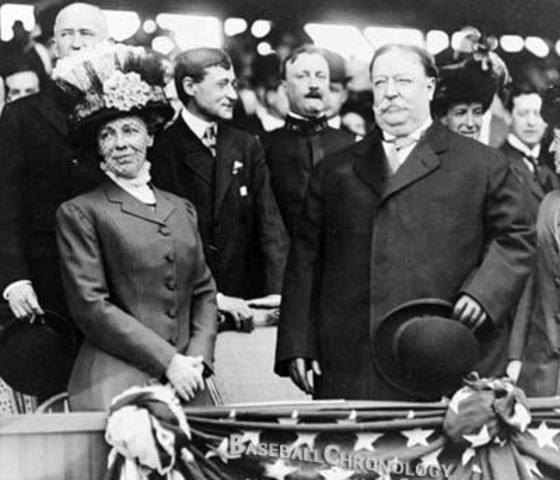 If William Howard Taft’s hold on the collective American memory is that he got stuck in a White House bathtub (likely false), his wife Nellie’s grip is weaker still. Yet Nellie played a crucial role in propelling her husband to the White House, and her subsequent stroke during his term in office irrevocably changed his presidency for the worse.

Née Helen Louise Herron, Nellie grew up immersed in American politics. Her father was a college friend of future president Benjamin Harrison, and shared an office with another future president, Rutherford B. Hayes. Hayes and Nellie’s father were especially close. When she was sixteen, Nellie was invited to accompany her parents to the Hayes White House for the president and his wife’s silver anniversary. Later in life, Nellie told journalists that, “Nothing in my life reaches the climax of human bliss, which I felt as a girl of sixteen, when I was entertained at the White House.”

Indeed, she told President Hayes that the visit had convinced her that she would marry “a man who will be president.” Hayes is reported to have responded, “I hope you may, and be sure you marry an Ohio man.” Hayes, Harrison, and the Herrons were all proud Ohioans (as was Nellie’s future husband).

Nellie herself was bright–she had a gift for languages, and studied French, German, Latin and Greek. She wrote in her diary that, “A book has more fascination for me than anything else.” Nellie wanted to continue her education–her brothers went to Yale and Harvard–but her father told her he could not afford to send her to college. Anyway, she was expected to find herself a husband, instead.

But this sort of lifestyle didn’t suit Nellie at all. Out of school, unable to take as many music lessons as she wanted because her father didn’t think they were worth the money, Nellie found herself “blue as indigo.” She wrote in her journal that, “I am sick and tired of my life. I am only nineteen. I feel as I were fifty.” The solution, she thought, was to find a job. “I read a good deal to be sure…but I should have some occupation that would require active work moving around–and I don’t know where to find it…I do so want to be independent.”

One has to wonder what Nellie could have accomplished if her father had coughed up the money for her to pursue her own education–although in the 1880s, neither Harvard nor Yale admitted female students.

In the end, Nellie enrolled in less expensive classes at the University of Cincinnati, where she studied Chemistry and German.

Although it horrified her mother, Nellie eventually decided to take a job teaching at a private school for boys. Nellie’s mother wrote her a letter detailing her alarm at this decision:  “Do you realize you will have to give up society, as you now enjoy it…it is quite the thing for a young girl in your position to teach in a boys school–and where there are no other ladies?” Nellie’s friends too questioned her “queer taste.” To this, Nellie wrote in her journal:

“Of course a woman is happier who marries, if she marries exactly right, but how many do? Otherwise I do think that she is much happier single, and doing some congenial work.”

At this point in her life, Nellie began to spend more time with William Howard Taft, a young lawyer whom she had had known as a girl and who had “[struck her] with awe.” Taft, for his part, started carrying books when he was around Nellie to gain her favor.

The first time he asked her to marry him, Nellie turned him down. According to Doris Kearns Goodwin, Nellie feared that marriage would “destroy her hard-won chance to accomplish something worthy in her own right.” Taft persisted. Perhaps he sensed that Nellie had ambitions beyond that of a wife and mother. Writing to try and convince her to change her mind, Taft said, “Oh how I will work and strive to be better and do better, how I will labor for our joint advancement if only you will let me.”

Nellie agreed and they were married in 1886.

When Taft became president in 1909, Nellie’s greatest dream had been realized. She had encouraged her husband to turn down President Roosevelt’s offers of a seat on the Supreme Court to keep his options open for the presidency (Roosevelt asked three times). Her great ambition of returning to the White House had become a reality. Although her husband admitted he felt “like a fish out of water” (indeed, Taft would later state that he hardly remembered his term in office–his true ambition, which he attained after his presidency, was to be the Supreme Court Justice), Nellie was right at home.

The New York Times noted that few had been so “well equipped” to be First Lady. Nellie had been a governor general’s wife during Taft’s tenure in the Philippines. She was social; she understood the ceremonies of the office; and she spoke Spanish, French and German, so she could hold conversations with diplomats from around the world. The new First Lady received accolades for her conversational skills, and her ability to converse on a variety of topics. She was quite a contrast to her predecessor, Edith Roosevelt, who believed, “a woman’s name should appear in print but twice–when she is married and when she is buried.”

As Taft began to take on the demands of the office, Nellie took on responsibilities of her own. She became an honorary chair of the Women’s Welfare Department of the National Civic Federation to advocate for workers in government and industry. Nellie refused the commonly accepted logic that college wasn’t for women, and publicly said so. Her own daughter eventually attended Bryn Mawr. When asked about women’s suffrage, Nellie stated:

“A woman’s voice is the voice of wisdom and I can see nothing unwomanly in her casting the ballot.”

Although some muttered that Nellie should focus more on “the simple duties of First Lady,” Nellie was equally eager to expand this role. Upsetting many New Yorkers, Nellie stated that she wanted to make Washington D.C. a social hub for Americans. Nellie set out to beautify the city. From her time abroad, Nellie had fallen in love with Japanese cherry trees and brought one hundred to Washington. When the mayor of Tokyo heard of this project, he sent 2,000 more.

“In the ten weeks of her husband’s Administration,” wrote the New York Times, “Mrs. Taft has done more for society than any former mistress of the White House has undertaken in many months.”

It was only a few weeks into Taft’s term that tragedy struck. Nellie, only 48, suffered a debilitating stroke. The right side of her face was paralyzed. Although the public was kept in the dark, Nellie had lost the ability to speak or express her thoughts in any way. She went to the family’s summer home in Massachusetts to recover. Taft needed his wife–needed her social drive and partnership. Weeks into his presidency, he had lost her.

Although Nellie recovered much of her facilities, she wasn’t able to play the part she so 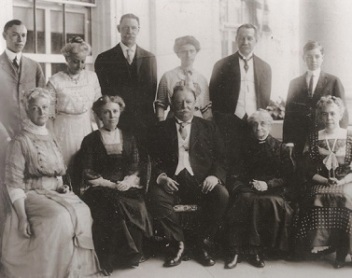 dreamed of in Taft’s administration. It certainly wanted for her influence. Without her, Taft was not able to play the dynamic social role he needed to fill the shoes of his bombastic predecessor, Theodore Roosevelt.

Still, despite a second stroke in 1911, Nellie and Taft were able to celebrate their silver anniversary at the White House–the same event that Nellie had attended as a girl. One can only wonder what someone like Nellie could have accomplished if she’d had access to education; and if she’d lived in a world where women could pursue a career without judgement. Perhaps we’d be writing about her presidency, instead.