Vice presidents have had mixed luck in seeking the office themselves. If Biden had run in 2016 and won, he would have joined a somewhat exclusive club of men who were elected president directly after being vice president. Not counting those who became president after a death, only four men have served as vice president and then directly ascended to the vice presidency. John Adams succeeded George Washington in 1786; Thomas Jefferson succeeded John Adams in 1800; Martin Van Buren succeeded Andrew 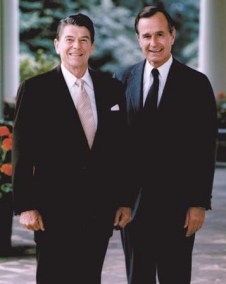 Jackson in 1836. This feat would not be repeated until 152 years later, when George H.W. Bush became president after serving as Ronald Reagan’s VP for eight years.

death of the incumbent–eight vice presidents became president this way, including Calvin Coolidge, Teddy Roosevelt, and LBJ, who once eerily remarked before Kennedy’s inauguration that he’d accepted the number two spot because, statistically, there was a one in four chance Kennedy could die in office.

Vice presidents face a myriad of challenges when running, especially when attempting to run for president directly after being vice president. For one thing, presidential elections often seem to inspire a desire for change among the electorate (especially after eight years). It’s a juggling act for any candidate of the same party of the incumbent, as they must define themselves apart from the president, and respond to criticism of the president without damaging his legacy. Al Gore faced this challenge when struggling to decide if he should campaign more with Bill Clinton–Clinton fatigue was in the air, so Gore decided against it. But in such a close election, Clinton’s support could have helped.

Presidents are also generally protective of their legacy. Vice presidents, especially when trying to make the leap from VP to POTUS, need to embrace the accomplishments of their administration. Yet it can be hard to define exactly what a vice president accomplished during office, whereas most big accomplishments are claimed by the president. A stark example of this came out in the 1960 election, when Eisenhower was asked to name a decision that Nixon had made during his two terms as Ike’s VP. Despite Nixon’s loyalty to Eisenhower, his work as a liaison between the White House and Congress, and his successful trips abroad, Eisenhower stumbled on the question. He gave the infamous answer: “Give me a week, I might think of something,” providing plenty of fodder for the Democrats defending their candidate (Kennedy) from accusations of youth and inexperience.

If Biden were to run in 2020, it could be an uphill battle. He could embrace Obama’s legacy, but would need to define himself outside of it. Like Nixon, Biden would likely benefit from his time out of office. If Trump’s first year in office is any indication, 2020 could wrap up a volatile four years–Americans may seek familiarity and the “insider” credentials that Biden possesses. Then again, the electorate is fickle, and it may continue its search for the next, new candidate.